This update and others are also at http://commonfrontiers.ca and www.quixote.org/honduras.

The Honduran resistance movement is real—it is also strong, diverse, and decidedly non-violent.

This is the last day of our international accompaniment and observation delegation to Honduras. For the past week our delegation has been busy accompanying a range of events leading up to the anniversary of the coup on June 28th, or “the anniversary active of popular resistance in Honduras.” We also continued meetings with representatives from various sectors active in the resistance movement—including women’s rights organizations, LGBTI coalitions, youth groups, academics, teacher’s unions, and peace-building organizations.

Over the weekend, we accompanied members of the National Front of Popular Resistance (FNRP) as they collected signatures—actually “sovereign declarations”—calling for a National Constituent Assembly in the Tegucigalpa neighbourhood of La Esperanza. Nationally over 800,000 signatures have been collected, and the Front expects to have 1.2 million by September 15th, which is Independence Day in Central America. These signatures will give them the moral authority and political sway, as a coalition of social movements, to convoke the National Assembly and begin the process of creating a constitution representative of the diversity of peoples, regions, sectors and experiences that make up Honduras. The current constitution, for example, does not recognize the existence of any indigenous peoples in Honduras, while it is generally considered that there are nine indigenous groups within its borders. The largest groups are the Lenca in the west and Garífuna along the northern coast. 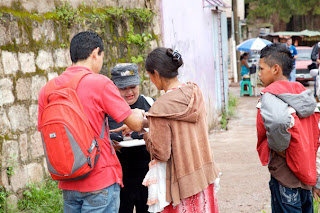 Members of the National Front for Popular Resistence (FNRP) collect sovereign declarations asking for a National Constituent Assembly
Sunday, on the eve of the anniversary, we accompanied a peaceful candlelight march that began at Francisco Morazán Pedagogical University. It was intended to go north on Miraflores Boulevard, veer right and stop at the presidential palace, then make its way west to the Congress in the centre of the city, where there was a vigil for all of the individuals who have lost their lives to state violence since the coup. When the crowd reached the first road leading to the palace, it was barricaded with cement blocks and chain-link fencing and guarded by soldiers in riot gear with machine guns. By the time the crowd reached Suyapa Boulevard, they had passed another route blocked by military in riot gear (who’s shields read “POLICE,” in English), and the east side of the main intersection was blocked as well. The marchers stayed at the intersection for about 20 minutes, chanting at the soldiers, some marchers asking them what they were afraid of. After the crowd faced the soldiers and sang the national anthem, someone with a megaphone asked for a show of hands to determine where to go next. It was getting late, but most of the group continued on to the Congress. Before moving on, organizers sent pick-up trucks out to the edges of the crowd to try to ensure that those who weren’t continuing with the main crowd had a safe way home and that no one would be travelling alone. 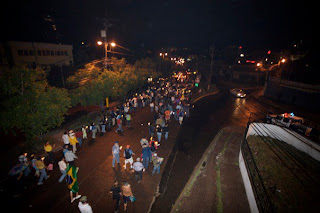 Last Sunday night's candlelight march
About 11:15 that night in our guesthouse, I received a text message from a former colleague in Honduras that Berta Caceres, the leader of the Coordination of Indigenous Peoples of Honduras (COPINH) had been detained by the police in the department of La Esperanza and the charges were not being made clear. Within a half-hour I received another message that she was released. I was told the next morning that the police department had received at least a dozen calls from human rights activists in Honduras and the United States and responded to the pressure. This was the night before the anniversary of the coup, when marches were being planned all over the country.

No major incidents were reported to us on Monday, the day of the anniversary. Though the marches in Tegucigalpa and other major centres were not accounted for in mainstream Honduran media, most alternative sources estimate a minimum of 10,000 participants at the Tegucigalpa march. Most people we talked with presumed that the state was aware of the international eyes on Honduras during the anniversary and wouldn’t take overtly repressive action. They believed the violations would continue in a strategic, targeted, and “silent” way, which has been the pattern observed since the Lobo government took power at the end of January. In a country with an average of 15 violent deaths a day, it’s not considered difficult for those who want to pass off political violence—including assassinations—as common delinquency, or to smear the victim by insinuating involvement in criminal activity. 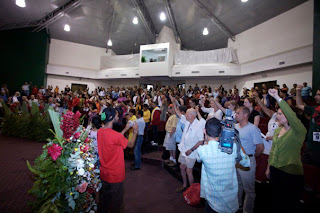 The audience at the inauguration of the True Commission (a people's alternative to the state-sponsored Truth and Reconciliation Commission) sing the Honduran national anthem.
Our group temporarily left the anniversary march to observe the inauguration of the True Commission (Comisión de Verdad)--the alternative to the government-sponsored Truth and Reconciliation Commission), and others from the march soon joined. The energy was high in the auditorium, which was full, and international support from across the Americas was present. That afternoon and evening there was a concert on the grounds of the Pedagogical University showcasing Honduran musicians and original resistance music written since the coup.

After the anniversary our delegation had meetings with organizations representing the two groups hardest hit by political assassinations following the coup—the LGBTI community, who have lost 27, and teachers, who have lost 21. When our delegation members asked why each of those groups were so heavily targeted, representatives from ARCOIRIS, an organization that works with lesbian, gay, bisexual, trans and intersex people, said its in large part because they are considered by those responsible to be some of the most dispensable and disreputable members of the population, and therefore of the resistance. In our meeting with the presidents of five different teachers unions we were told simply that to repress teachers is to repress the next generation of resisters—and the strategy was clear. 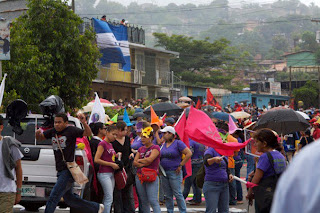 Feminists in Resistance (in the purple t-shirts) at Monday's anniversary March
We also met with representatives from Feminists in Resistance, a collective of individuals and women’s organizations that formed after the coup, who outlined the particular, gendered ways that women have been targeted in the resistance—from rape and sexualized beatings perpetrated by soldiers and police during demonstrations and curfews, to references in the mainstream media to “loose” and “irresponsible” women who take to the streets instead of taking care of their families. They also expressed clear determination to regain the ground they lost after the coup in terms of women’s rights, and sincere hope that with the increased organization and rejuvenation of their movement they would get even further. According to these representatives, since Lobo has taken power, the morning-after pill—and any education or advertising referencing it—has been made illegal. A new, inclusive sexual education guide that they had approved under the Zelaya government has been gutted, and the hard-won Institute for Women is being shut down and reportedly replaced with an “Institute for the Family.”

This morning, a couple of hours before delegation members were scheduled to leave for the airport and return home, we received a call that a highly-visible member of the resistance, whose partner was killed as a result of tear gas poisoning during a demonstration last year, had been arrested for an alleged traffic violation. He was reportedly badly burned by pepper spray from the police officers, had been tasered, and also couldn’t open one eye. Some delegates went to the local police station with staff from the Committee of the Detained and Disappeared of Honduras (COFADE) to inquire about his welfare and ask if they could see him on their way to the airport. Shortly afterwards, we found out that a warrant was now out for the arrest of another outspoken member of the resistance because two years ago workers had cut down trees on her rural property, allegedly violating environmental laws. 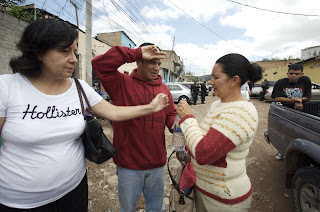 A member of the resistance is who has been pepper sprayed and tasered is released from police custody following a visit from the director of COFADEH
On this Canada Day there is no shortage of recent events that encourage me to reflect on our country’s role internationally in support of violent, repressive regimes—such as backing the post-coup regime in Honduras, continuing support for Israel’s war on Gaza and the Palestinian people, and the recent signing of the bi-lateral free trade agreement with Colombia. And with the recent detentions, violence, and violations of civil liberties during the G20 meetings in Toronto, we’ve got several more reasons to doubt our current government’s respect for human rights at home, including the right to dissent.

I want to reiterate that the resistance movement is large, vibrant, multi-faceted, and decidedly present in Honduras. We do not hear about it via mainstream in North America, if we hear about the situation in Honduras at all, and major media in Honduras clearly misrepresents and undermines its existence. All representatives we met with insisted that as international delegates we must counteract the lies and omissions and let people in our countries know that their movement is real. In our meeting with him yesterday, Dr. Juan Almendares Bonilla, the Executive Director of the Centre for the Prevention and Treatment of Torture Victims and their Families (CPTRT) and an eminent human rights defender in Honduras, reminded us that international solidarity between peoples—despite the national boundaries and governments that divide us—is the most important and essential power we have, and we need to exercise it, mutually.

For more information about this delegation and additional updates or media releases:
The Quixote Centre: www.quixote.org/honduras
Common Frontiers Canada: http://commonfrontiers.ca

For more information about the recent situation in Honduras and Canada’s role:
Honduras: Democracy Denied
A Report From the CCIC’s Americas Policy Group With Recommendations To The Government Of Canada