Which “Truth” will the world support in Honduras?

Today was second day of our international human rights accompaniment and observation delegation in Honduras. Initial meetings were held yesterday with representatives from the International Committee and the leadership of the National Popular Resistance Front (FNRP), and Platform for Human Rights in Honduras, a coalition of human rights organization. They gave a general overview of the events leading up to the coup on June 28 of last year, the human rights situation in Honduras since the coup, and their continued work to reconstruct democracy in Honduras under increasing repression. This violent repression has continued under the government Porfirio Lobo, who was named president following a campaign and election process held under the auspices of the de facto coup government in the last half of 2009.

Today we had further sessions with the Lawyers Front and Lawyers in Resistance, legal experts who meticulously outlined for us the judicial framework under which the coup occurred and explained the legal processes by which popular movements in Honduras are petitioning to eventually rewrite their constitution. The lawyers also clearly established the legality of ousted president Mel Zelaya’s proposed referendum on a National Constituent Assembly, and that in no possible way could this referendum or any steps following it have lead to his reelection. This is important, because those who carried out the coup in Honduras, as well as some of the foreign governments who initially condemned it, such as Canada and the US, still state the “reason” for the coup as Zelaya’s renegade referendum that allegedly violated the constitution, effectively blaming the ousted president as well as those who carried it out and consequently took power (General Romeo Vásquez, former head of the armed forces and Roberto Micheletti, former president of the Congress).

This afternoon, leadership of the Committee of Families of the Detained and Disappeared in Honduras (COFADE) spoke bluntly with us about the cycle of violence they have witnessed and worked to transform since the early 1980s, their efforts to achieve justice for the murders and forced disappearances of their loved ones, and their despair and persistence in the face of renewed violent repression since the coup (including direct political assassinations—21 since late January alone when Lobo took power—and the renewed activities of clandestine death squads that were initially active in the 1980s). This is not the information being disseminated about the current situation in the country by mainstream media, either here in Honduras or North America.

All organizations we spoke with made reference to the government sponsored Truth and Reconciliation Commission, which despite being elaborated without fulfilling any of the minimum international standards for such Commissions, is being fully endorsed by the Canadian and US governments. This official commission proposes to investigate the events leading to the 2009 coup, as well as the human rights violations that followed. However, victims of these human rights violations have not been included in the formation of the commission, such as the process of appointing individuals to the commission, or deciding how the investigations of the commission will take place. President Porfirio Lobo is responsible for appointments to the commission. It has a mandate of four and a half months, yet according to the organizations we met with, the commission is not committing to releasing results for 10 years. The representatives we met with reiterated that it is an imposed commission—not one that has arisen from dialogue among affected parties seeking a common solution—and asked us, “how can truth and reconciliation be imposed?” They’re convinced the primary motivation behind the commission is the political weight it will carry in allowing them to be formally recognized as a legitimate government, and help them be reintegrated into international bodies such as the Organization of American States (OAS), which Canada and the US are lobbying particularly hard for.

Canadian Michael Kergin, former diplomat and lawyer with Bennett Jones LLP, a law firm that works with Canadian mining companies active in Honduras, has been appointed to the government-sponsored Truth Commission, and Minister of State (Americas) Peter Kent has specifically endorsed on several occasions. Many consider Kergin’s appointment to reflect a clear conflict of interest. Canadian mining and textile companies are very active in Honduras and are reported to have benefited from the 2009 coup, which some argue relieved them from proposed economic, legal and land reforms proposed by the Zelaya administration.

These are some of the reasons why the Platform for Human Rights in Honduras has elaborated an alternative commission, which they call “the True Commission” (la “Comisión de Verdad” in Spanish, vs. the government sponsored “Comisión de la Verdad y Reconciliación”). According to representatives, they have gone through all the processes required by international law for creating this commission—and they have formally informed the United Nations, the G-16 group of donor countries in Honduras, the Organization of American States (OAS), and the Union of South American Nations (UNASUR). They report that not one of these bodies has discouraged them from moving forward with the True Commission, but each has reiterated the danger and risk they put themselves in as organizations and individuals in Honduras by moving forward with their alternative Commission. This response is taken as further evidence of the oppressive climate of fear and silence perpetuated by the state, which makes it fundamentally unsuitable for overseeing such a commission. Honduran human rights defenders are proposing that the True Commission be entirely independent and autonomous, even from the Platform and the FNRP, and that it have one year to carry out it’s mandate, with the commitment of reporting it’s results in July of 2011.

Canada will also be represented on this alternative commission by York University law professor Craig Scott, who is a full Professor at Osgoode Hall Law School and the Director of the Nathanson Centre on Transnational Human Rights, Crime and Security at York University. Other members include legal experts, judges, religious leaders, and human rights advocates from across the Americas.

The True Commission will be inaugurated early next week during the activities surrounding the one-year anniversary of the coup in Tegucigalpa. Our delegation will be present for these activities to give witness to Hondurans’ demands for representative democracy and respect for human rights. We have been asked to speak to our friends and networks at home, to let you know that the majority of Hondurans are committed to seeking the truth—the real truth—and pursuing justice, non-violent resolution, and participatory democracy, but that they need the rest of the world to listen. 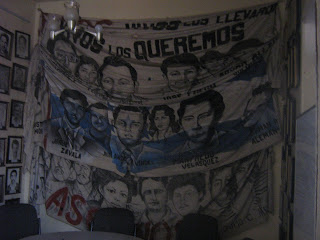 "Alive you took them, alive we want them"
A banner hung inside the main meeting room of COFADE (Committee of Families of the Detained and Disappeared of Honduras)