As this is being written, at 11:00 AM on March 18, 2011, police and military are violently evicting teachers from the National Teacher's Pension Institute (INPREMA), which they have been occupying for two weeks protesting the new General Education Law, which teacher's associations believe to be a legal mechanism to move towards the privatization of all levels of education in Honduras, and demanding the government pay a debt of approximately 1,500 million lempiras (approx. 80 million USD) which it owes the pension fund. The government is threatening to shut down INPREMA for alleged misuse of funds. Please stay on alert for more news. Soldiers in Comayagua block off access to the police station where 31 teachers were being held, March 17th, approximately 1:00PM

Protests took place across Honduras yesterday in support of public education and teachers associations, and against the rising costs of fuel, and as a result, of the basic food basket. Highways and major intersections were blocked in various regions, including Comayagua, San Pedro Sula, Choluteca, Danli, and Los Planes, Colón, and major streets were taken over in Tegucigalpa.

International human rights accompaniers with the Honduras Accompaniment Project travelled with human rights defenders from COFADEH yesterday who were responding to reports of the detention and mistreatment of over thirty teachers and parents in Comayagua and seven people in Danli. Shortly after accompaniers left Tegucigalpa with teams from COFADEH around 11:00AM, police began to use tear gas and beat and detain protesters who refused to clear the streets of the capital. COFADEH received reports that over 20 people were detained in Tegucigalpa.

In Comayagua, two individuals had been released by the time the human rights defenders arrived at the central police station where the remainder were being held 12:30PM. One man, a parent of a school-aged child who was supporting the teachers, had also been sent to a clinic in nearby Ajuterique, near the highway intersection that protesters had been blocking, due to a bullet wound to the leg and head injuries. Bertha Oliva, the director of COFADEH, was eventually allowed in to verify the well-being of the remaining 31 detained individuals, all teachers.

The detainees were released without charges at approximately 4:00PM after negotiations between the police and representatives of the teachers, where they agreed to pay 2,000 lempiras (approximately 105 USD) to replace a windshield of a police vehicle broken during the protests. The windshield of a vehicle driven by teachers during the protest with loudspeakers voicing there demands had also been smashed. The majority of the detainees and at least 5 individuals waiting outside had been beaten by police officers using batons. Testimonies and photos were taken by COFADEH.

In Danli, the team from COFADEH arrived at the police station were teachers were being held around 12:00PM. Seven people were detained including one woman, and two were examined by a forensic physician, one for a fractured shoulder and another for severe blows to the back. Though they had been charged by police with sedition, they were released by the prosecutor's office without charges around 4:30PM.

In Tegucigalpa, all detainees were eventually released except for one, Edwin Robelo Espinal, who remained detained overnight in the Metropolitana #1 police station in central Tegucigalpa in the Los Dolores neighbourhood. COFADEH requested an international action alert, distributed by Rights Action, and calls to the police station last night to inquire regarding Edwin's physical well-being, which police agents and the prosecutor on duty assured were being protected. Edwin has protective measures from the Inter-American Human Rights Commission due to torture and harassment by members of the national police in his neighbourhood since 2009. Yesterday he was accused by police of illicit protesting and kidnapping of a 10-year-old girl who he rescued from the tear gas at the request of a journalist on the scene who found the girl lost and crying, and who's family gave declarations in favour of Edwin to prosecutors and public defenders last night, negating any justification of charges of kidnapping. He is due to appear in front of a judge today.

There were no reported detainees in Choluteca, San Pedro Sula, or Los Planes. 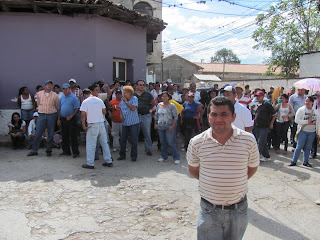 Supporters gather near of police station in Comayagua where teachers are being detained, March 17, approximately 1:00PM