Original article in Spanish from defensoresenlinea.com

This week saw the forced exile of the young Renan Hector Soto Caballero, director of the Civil Society Group, GSC, a promise to Honduras, but continued harassment placed his life in a threatening situation.

The Committee of Relatives of the Detained and Disappeared of Honduras, COFADEH, sent a denouncement to the Inter-American Human Rights Commission, which then requested information from the State of Honduras, which to date has been negligent in protecting the integrity of Soto Caballero.

Minutes before leaving his homeland, Hector stated that these are not easy times, "to think differently in this country is dangerous and for some human rights defenders like myself we are being forced to retreat under such circumstances basically to safeguard our physical well being, hoping that the processes that we are promoting continue, we are taking a momentary pause because circumstances are too risky to guarantee one's life in their own country."

Bertha Oliva, coordinator of COFADEH, said goodbye to Hector with his mother and father who were very concerned with the forced journey of his son.

In relation to leaving his family which is a painful situation, “all of us who leave do so with the intention to return as soon as possible, it depends on the political will to respect freedom of speech of citizens who disagree.

To the international community I make an invitation to review its policies of support, especially to the government to whom they are giving a lot of legitimacy, and strong financial support to institutions that have a double standard, a public face of good governance, within the country a lot of repression.

We hope that they take these cases as a clear proof that the situation in the country persists and that a lot of commitment and pressure is needed to change this picture."

I do not understand that those who do so much harm to Honduras walk freely in the streets. 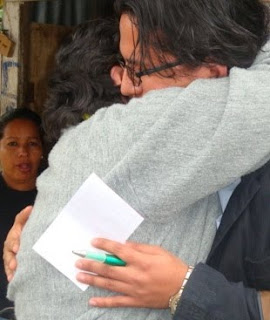 Hector says goodbye to his mother

Doris Caballero, Hector's mother, expressed through tears that is difficult for a mother, "there are no words, for a mother being separated from a child, especially Hector Renan who is a promise for the country, who since a small child has had his principles, is not easy.

"I think about the qualities of my child, the human being that he is and know that there are people who do so much damage to the country and walk the streets freely, I never thought my son would have to go through this."

Likewise for Hermilo Soto, Hector's father, it is not an easy situation, "as a parent I feel very sad and pained because Hector Renan has to leave the country against his will, he always aspired to live here with his family, be a professional and contribute in a healthy and positive manner that will help change things, "he lamented.

With regard to the danger in which his only son has been, Hermilo, accepted that the entire family has lived a lot of stress, severe pain, "my wife spent about 15 days with no sleep, and his sisters cry."

Hermilo added that it has generated a family trauma, "when we realized that he had received death threats, that they were pursuing him, sent him text messages and in state of defenselessness in this country, any phone call generates alarm, with that the family loses peace, work productivity is also lower because you do not finish your work because you lose concentration."

He recalled that when he lived his own risks in the 1980's through his commitment as a trade unionist at the time, maybe he was prepared to take personal risks, but one is never fully prepared to cope with the risks of their children, “I wanted the risks and uncertainties which my generation lived in the 80's not to be lived by my children.”

He also lamented that, like his son, unfortunately many young people who are unhappy and want to help drive change in this country, cannot live here, due to the intolerance of the powerful, the army, the police, "because we have a militarized state, a police state."

With respect to the official discourse of the government, which negates the forced expulsion from Honduras of many people who have gone into exile, it may be because embassies in the country are not pronouncing themselves, or it could be that Hondurans are not formally soliciting their right to exile and have to take the more risky road and leave in whichever manner from the country.

Soto Hermilo very concerned that the international community are insensitive to the case of Honduras, during the coup the problem of human rights violations was a topic of much discussion, but now in the continuation of the coup they are not a priority.

"We see for example that the European Union is giving around 40 million euros to the Ministry of Security, a police force with high levels of corruption, senior police officers directing delinquent groups and the international community providing assistance without demanding anything in return, not even a real effort to reform the police," he lamented.

For years there has been an effort of the international community to strengthen the judicial system, the investigative systems, and we have a system that does not protect us or is not applied to those who violate it, in fact it has a political bias; is applied to the weak, the vulnerable, and not those who do not transgress it.

A message to his son-in-exile 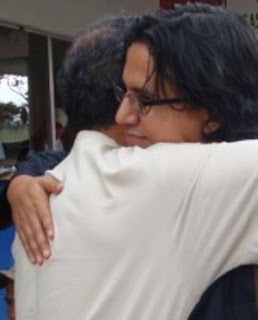 Hermilo Soto says goodbye to his son, while asking the international community to reconsider its policies concerning Honduras

With much pain and on the point of tears, Hermilo sent a message to his son: "Héctor Renan I suggest you keep your beliefs, I believe that difficulties and challenges strengthen the character of the people; never forget the values of solidarity we instilled in our house and go forward."

Telephone calls from unknowns in recent days to the house of his parents, precipitated the exile. This is in spite of the fact that Hector had handed in a phone number from where he received threatening messages, which has been in the custody of the police for several weeks now.

Since August of year 2010 a denouncement was filed by COFADEH to the Attorney-General, Luis Rubio, but there is no result to date.

To date, since the coup, more than 200 people, including President Manuel Zelaya Rosales, are in exile. Between December 2010 and February 2011 many families have left to exile under the imminent threat to their personal safety.