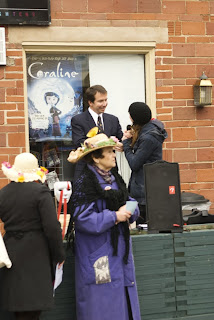 WOLFVILLE, NS—As the controversial Canada-Colombia Free Trade Agreement proceeds into second reading in the House of Commons, pressure is mounting on the Liberal party, and its international trade critic, to drop its support for the proposed accord.

On Friday, December 4th, over 80 people rallied in front of the Wolfville, NS, office of Scott Brison, MP for Kings-Hants. Brison, the Liberal International Trade Critic, was targeted because of his support of Bill C-23 - an Act to implement the Canada-Colombia Free Trade Agreement (CCFTA). The rally also came only days after the Conservative government cut funding to a well-known NGO critical of Canadian foreign policy.

Free trade critics say the CCFTA, like the North American Free Trade Agreement (NAFTA) and other free trade agreements, serve the interests of capital. They described free trade agreements as a mechanism that allow soaring profits and reduced labour costs through the super-exploitation of workers in economically and politically oppressed areas. Labour unions, human rights organizations and church groups across Canada have decried the 38 assassinations of trade unionists in Colombia this year as reason enough to oppose the deal.

Brison sits on the House of Commons Standing Committee on International Trade. Earlier this year, Brison and the committee “called for a full independent human rights impact assessment of the proposed free trade agreement with Colombia,” said Kathryn Anderson of the Church in Action Committee of the Maritime Conference of the United Church of Canada. “Brison no longer supports this and his uncritical support for the CCFTA today is beyond the pale.”